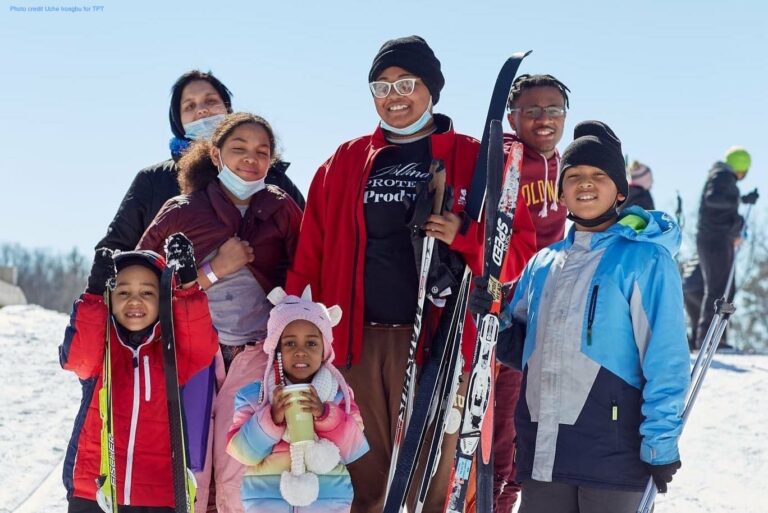 It’s been nearly two years since the death of George Floyd, the African American man who died at the hands of the police in Minneapolis, Minnesota on Memorial Day Weekend 2020. Barely three months into the COVID pandemic, his death shook the nation.

Yet it was also a turning point. The moment when social awareness cast a stark light on the injustices of racial inequity, and the Black Lives Matter movement rose to the forefront, with terms such as “stay woke” becoming part of our everyday vernacular. George Floyd’s death brought us a deep melancholia for which there are no words. Ultimately, it caused many within the public media system to wonder whether it was time for change.

For Lynn Farmer, who lives less than a mile from Cup Foods, the location where Floyd took his last breath, his death was surreal.

“It’s still very traumatizing for the community,” she says. “It’s going to take a long time to heal.”

In nearby Saint Paul, Twin Cities PBS CEO, Sylvia Strobel looked to the future. Recently appointed to head TPT, Strobel conducted a search for Vice President of Marketing and Communications, and hired Lynn Farmer for the position. Farmer began in January 2021, taking part in the creation of The Future of TPT: A Strategic Roadmap. She also was charged to lead marketing research in order to grow TPT’s BIPOC and youth audiences, and serve as head of marketing and communications.

Farmer started out by revising her team’s job descriptions so that they could reprioritize and focus on audience research. She also distributed a robust member donor survey, which received about 3,400 responses. Some of the qualitative feedback from members and donors indicated, “TPT, you need more diversity.”

During this time, TPT conducted research to better identify its BIPOC audience, and did this by using the 2010 U.S. Census to determine the five main BIPOC communities within its audience:

“It was really important for us to call out these nuances,” notes Farmer, “because as we try to engage and market to these groups, we want to be able to laser-target who they are and where they are.”

TPT then focused on developing content designed to appeal to each of these groups.

“An example of how we used this information at TPT was through One Year Later, an initiative in May [2021], commemorating the anniversary of George Floyd’s death,” says Farmer. “It was under an even larger initiative called Racism Unveiled. We knew that as part of this initiative, we wanted to reach out to our BIPOC audiences. And the way that we did that was by hyper-targeting local, BIPOC-serving media.”

Farmer estimates it could take up to 20 years for the new audiences that TPT is targeting, to become members and donors. She feels the wait will be worth it, however, and credits Strobel for having the vision.

“Sylvia has a powerful vision for this organization and made it a priority,” notes Farmer. “She really wanted to expand our audience with a deep dive of the two groups we were going after, young—and ‘young’ in our definition is approximately ages 35 to 55—and BIPOC. We want to be really clear on who our audience is and she gave the marketing department the bandwidth to do that.”

Farmer, who has an extensive background in marketing from the Target Corporation and Hamline University, was grateful when Jess Bellville transferred to Farmer’s team.

“Jess is the first candidate I wanted for this new role,” Farmer says with genuine enthusiasm. “Mainly because of her experience in marketing at TPT. I thought she was a great person to round out the skillsets we needed.”

Bellville, who had already worked at TPT for six years, points out the success TPT has had with Racism Unveiled. Funded by foundations and other partners, it is a project that addresses racism and what it looks like, especially in the Twin Cities.

“Initiatives like Racism Unveiled are designed to be a multimedia platform storytelling project,” explains Bellville. “It’s anchored on TPT Originals, the storytelling project I manage on our website. We have a final digital series that we’re able to continue releasing now through early May, primarily supported by the Otto Bremer Trust, as well as some other funders. Mostly article-driven, there have been some television programming elements to raise awareness and to help reach a slightly larger audience.”

TPT also developed a documentary, Bring Her Home, focusing on missing and murdered indigenous women. For this, Farmer did a full-page media buy in The Circle, a Native American newspaper, and TPT held a virtual screening for the program, with approximately 1,000 viewers who registered for the event.

“We have so much amazing content,” Farmer observes. “We didn’t even get into the Jim Crow of the North initiative. That got almost 1.5 million views on YouTube.”

Emilio Maldonado, an intern hired by TPT to work 20 hours per week for 12 weeks, also proved invaluable to Farmer.

“One of the things Emilio was tasked to do,” says Farmer, “was create a community resource database. He went into local neighborhoods and picked up their local newspapers so we could have a great list of what these newspapers were. He talked to people in barbershops and asked, what are you listening to, what do you read? I had him research which local media resources really served those audiences well, knowing that we wanted to invest in those media companies as well as making sure those audiences were aware of some of the work we’re doing.”

For a Warm up to Winter outdoor event, which featured BIPOC hosts as part of the Racism Unveiled initiative, it was important to make the events as easy as possible to attend by convening these for and in locations near BIPOC communities. Farmer’s team also made sure to advertise the winter festivities in the Sahan Journal, a BIPOC digital news source.

“We spoke to Minnesota Spokesman-Recorder,” Farmer says, “which is an African American-led local newspaper that we intentionally advertise in, to make sure we reached the intended audience.”

What’s in store for the marketing research in the future? TPT has a newsletter for Racism Unveiled that will continue to be sent out. The station plans to extend Diversity & Inclusion efforts throughout the station and community.

TPT is also gearing up for a new series called America Outdoors with Baratunde Thurston. The series, which will feature BIPOC representation, is slated to air in July on PBS. Farmer also plans to repurpose marketing dollars in order to reach intended audiences, particularly since it is a strategic station priority.

Farmer hopes other stations will draw upon TPT’s vision of audience growth. She reminds these stations that much of the initial groundwork was simplified by bringing on an intern.

“Emilio made a community database,” Farmer explains, “and actually did a video presentation that’s now housed internally so that any new person at TPT, watching the presentation, will have access to the database.”

She further explains, “I would approach the marketing research from an audience-first perspective. Get buy-in from your leadership. Make sure they’re on the same page as to who is your emerging audience, and are in alignment with the definition of what those are for your organization.”

“I would say this is one of our marketing team’s biggest achievements so far,” Farmer adds. “For me, it’s been a personal stake in reaching this audience for TPT, but it’s not about making them members yet. Let’s build a relationship with these communities and sustain it and then hopefully, through that affinity, we will grow the future generation of members and donors.”

Above photo: TPT partnered with Melanin in Motion to offer a Winter Warm Up event in March of 2022.