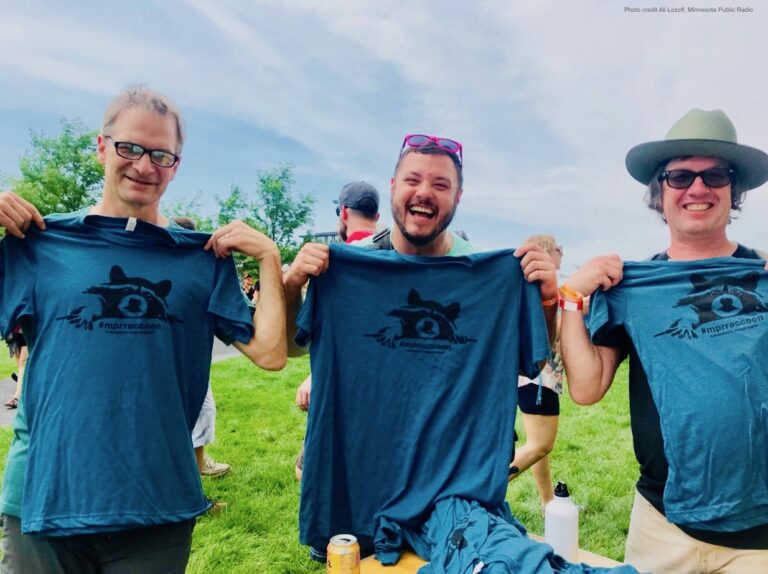 On Tuesday, June 12, a raccoon got stranded on the side of an office building across the street from Minnesota Public Radio, the public radio station in the Twin Cities.

The station’s reporters quickly dubbed the critter #MPRraccoon, and as it climbed up the building to safety it attracted worldwide attention. But as the newsroom covered the viral phenom, others at MPR tried to meet listeners’ request for raccoon merchandise. This week in Solution Set, I spoke with some of MPR’s leadership to better understand how they responded to this unique moment.

June 12 was a fairly normal Tuesday afternoon at Minnesota Public Radio until staffers noticed something odd on the building across the street: A raccoon was climbing up the side of a building.

Journalists, as they’re wont to do, quickly began tweeting about the little critter, and MPR reporter Tim Nelson christened it the #MPRraccoon as he reported extensively on the animal’s progress.

Soon, people far beyond Minnesota began following the raccoon’s ascent. Social media posts spread rapidly around the Internet, #MPRRaccoon trended on Twitter, and news organizations from around the world began publishing stories about the raccoon.

People from all around the world also began producing art depicting the raccoon’s challenge. And as the drawings and depictions appeared on social media, users had another request: Can I get an #MPRraccoon tote bag or T-shirt? (This is public media after all.)

So as the raccoon continued its climb, MPR began thinking about how it could make the most out of the unexpected attention.

“The conversations were how do we, Minnesota Public Radio, respond to this? It was more about feeding what the audience wanted and being true to who we were than how can we make money so to speak,” said Jennifer Van Zandt, managing director of marketing & creative services.

#MPRraccoon took off on Tuedsay afternoon, June 12. The raccoon safely reached the top of the building in the early morning hours of the following day, Wednesday, June 13.

By that afternoon, MPR was already selling T-shirts and tote bags.To get the products ready to sell that quickly, the station needed a cross-functional effort. As soon as MPR realized that the raccoon story was taking off, leaders from marketing, communications, and member and audience services began meeting to discuss how they should respond.

The team held in-person huddles to discuss their plans.

“It did help to have some really fast face-to-face meetings so we could get all the issues out and get them resolved within a smaller group as we needed,” MPR membership manager Bob Breck said.

Each department put less urgent projects on hold and appointed a point person to handle the onslaught of the raccoon story. Other staffers, meanwhile, took over projects that still had deadlines.

“We put the projects that can’t stop on part of the team and we usually appoint one person to handle the hot topic that’s happening at the moment,” Van Zandt said.

The station decided it wanted to offer two products: T-shirts, which anyone could buy, and a tote bag, which would be available only to new or existing members. (More on the decision to structure the offer that way in The Lessons.)

MPR designed the t-shirt internally, but the tote bag was designed by Michael Byzewski of Aesthetic Apparatus, a local design firm that the station had previously worked with. At the height of raccoon mania, the company tweeted out a tote bag design, tagging the station and saying, “I have your next pledge drive gift all designed and ready to go!” (MPR ultimately used the design on a T-shirt also.) 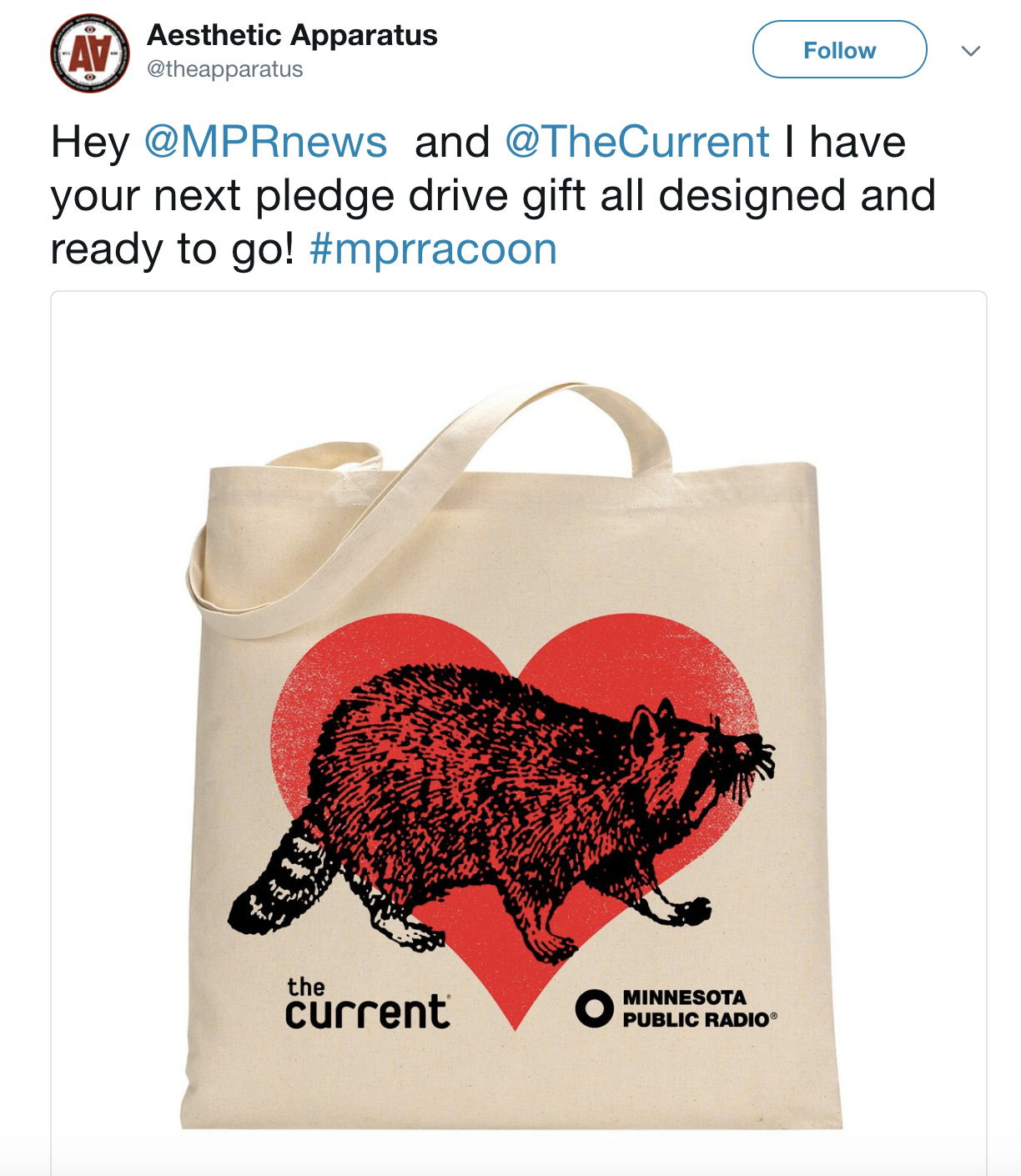 “They tweeted it, and we grabbed onto it,” Van Zandt said.

MPR recently switched its e-commerce to Shopify, which was able to efficiently add the items to the site and manage sales. It then used Point B Solutions, a Minnesota-based company, to print the shirts and handle fulfillment.

They’ve gone through multiple printings but decided to limit the number of runs.

Previously, MPR has used its various email lists — comprised of both members and non-members — to promote merchandise and to push memberships, but with #MPRraccoon, it decided not to utilize those platforms because the conversation was so driven by social media, especially Twitter.

One of the other early decisions MPR also made was that it wanted to donate some of the proceeds from the raccoon merchandise to a wildlife conservation organization, so it also spent some time looking for an organization with which it could partner.

MPR is still tracking the results of the #MPRraccoon sales, but it said that it sold nearly 2,000 T-shirts within the first 24 hours. The T-shirts cost $25 each, so the initial sales generated about $50,000 in sales. (MPR wouldn’t tell me the costs of producing the shirts or how much they actually netted from the sales.)

The station only ordered a limited run of shirts. One design is sold out, and it’s already sold out of shirts in the other design in size Medium and Large. 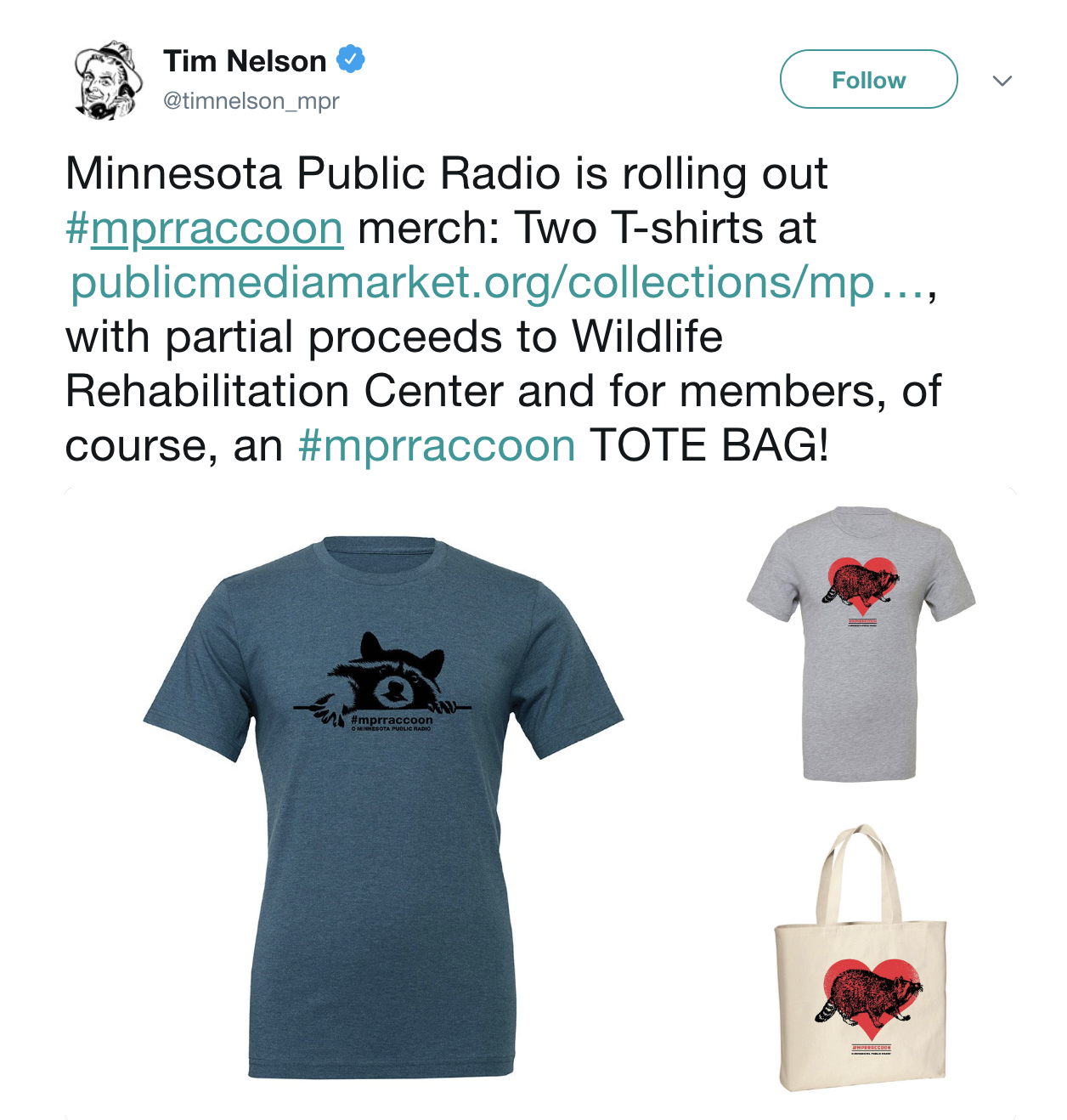 With the tote bags, MPR has had 273 donations, which includes support from 88 new members. To receive a bag, new members had to pledge $5 per month. Existing members had to increase their contribution by $5 per month in order to qualify for the bag. Sustaining members, who make a monthly donation, also receive one gift from the station each year, and sustainers could have chosen the tote bag as their annual gift if they hadn’t received it yet.

When I spoke with MPR last week, the tote bags were on back order and the station was planning on fulfilling the orders as quickly as it could.

In its fiscal year ending in June 2017, MPR raised $22.8 million in individual gifts and membership, about 24 percent of its total earned revenue of about $96.4 million.

• Give people choices: Membership is the lifeblood of public media, and some of the earliest conversations the MPR team had around #MPRraccoon was about how it could offer membership perks.

Given the global interest in the raccoon, MPR also recognized that membership wasn’t a feasible option for everyone who was interested in purchasing merchandise. By selling the T-shirts to a wider audience, MPR was able to reach people who otherwise wouldn’t join the station or really have an excuse to interact with MPR.

The T-shirts are also a relatively easy entry point for MPR to begin relationships with potential listeners and members. By selling them shirts, MPR can work on moving them down the engagement funnel into ultimately becoming members.

The tote bags also enabled MPR to deepen its relationship with existing members who decided to increase the amount of their monthly sustaining memberships with the station.

“The general philosophy we have is that if something is being used as a thank you gift, we want to at least for a period of time allow some kind of exclusive access for members,” Breck said. “It provides more value that we can articulate to the members to be a member.”

By maintaining different types of products, MPR was able to reach new audiences and also connect with its most loyal supporters.

• Act fast!: This is a simple point, but it’s worth reiterating. #MPRraccoon peaked on June 12 and 13. After two weeks, the Internet, as it tends to do, moved onto other things. (Though a local minor league baseball team later had an #MPRRaccoon night.)

For MPR to truly take advantage of this opportunity, it needed to move fast, and it did.

“We recognized that it was a moment in time that we could participate in for the benefit of our audiences,” Breck, the membership manager said.

One of the reasons MPR was able to mobilize its team so quickly is that it’s been through similar circumstances before. When Prince, a Minnesota native, died in 2016 MPR similarly mobilized to respond to the news. The Current, MPR’s music service, switched to a Prince-only playlist, MPR handled interview requests coming in from around the globe, and it also in short order planned a block party to celebrate Prince’s life.

“It was across departments and involved people working together to really listen to what our audiences were wanting and seeing and determining the best way we could respond,” said MPR Director of Communications Angie Andresen.

Because it had been through this type of viral moment before, MPR knew how to respond and how to organize its team.

You can never really predict when stories like this will take off, but it helps to be prepared for when they do catch on.

MPR is focused now on fulfilling all the orders, and in many ways the station has already gone back to normal operations.

“It is what it is at this moment. I don’t think raccoons are going to be taking up all of our time,” Van Zandt said.

The membership team, meanwhile, is planning to analyze the membership boost that resulted from the #MPRraccoon, and it’s going to examine how it can best keep those members engaged and ultimately retain them.

“We are going to be tracking people who came in with the intent of getting a tote bag separately,” Breck said. “It’ll be interesting months out, a year out, and beyond to analyze what happens to them and how we can perhaps steward them in a different way.”